Did you know that? ‘A baker’s dozen’ 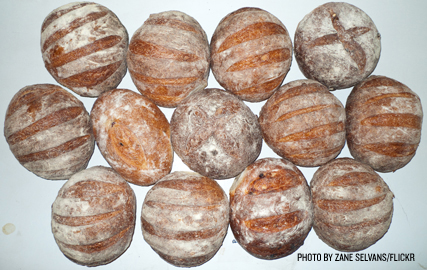 It’s widely believed that this phrase originated from the practice of medieval English bakers giving an extra loaf when selling a dozen in order to avoid being penalized for selling short weight.

A baker’s dozen is 13, one more than a standard dozen. The oldest known explanation for the expression “baker’s dozen” dates to the 13th century in one of the earliest English statutes called the Assize of Bread and Ale.  Bakers who gave short measure could be subject to severe punishment including judicial amputation of a hand. To guard against losing a hand to an axe, a baker would give 13 for the price of 12 in order to be certain of not being known as a cheat.

Specifically, the practice of baking 13 items for an intended dozen was insurance against “short measure”, on the basis that one of the 13 could be lost, eaten, burnt, or ruined in some way, leaving the baker with the original legal dozen. When selling in quantity to wholesalers they would add an extra loaf or two. When selling single loaves to individuals they would offer a small extra piece of bread. The Worshipful Company still exists and reports that this carried on within living memory and that a small ‘in-bread’ was often given with each loaf.

However, there is some doubt over whether this is the real explanation for the expression, because baking 13 instead of 12 units has been good practice all over Europe, not only in England.